What are the most authentic Italian/Neapolitan pizzas?

In Naples, where modern pizza was invented, the traditional Neapolitan pizzas are the Margherita and the Marinara. Naples is still generally regarded as making the best pizzas in the world and it is somewhat of a mecca for pizza enthusiasts.

You have probably heard the term “Neapolitan pizza” before. This is what we use when referring to pizza made in the style of those that come from Naples.

Remember that with authentic Italian pizzas, less is more in terms of the toppings. This is true of most Italian cuisine. The ingredients are carefully chosen to compliment each other as well as possible.

Many pizzerias in Naples only serve a couple of different pizzas. Whilst I think that there are other great combinations, I do think it’s a great starting point to take a look at the traditional Italian pizzas and their toppings.

The Margherita pizza is the classic pizza that we all know and love.

The key here is quality, don’t skimp on the ingredients. Buy the highest quality ingredients you can afford, trust me it will be worth it. It will still turn out a lot cheaper than buying a takeaway. What’s more, it will be a million times better!

Many people think of a margherita as being boring but when made with love and good ingredients, this is one the best pizzas there is.

The tomato sauce gives a wonderful rich flavour with a hint of acidity, the mozzarella provides a creaminess with a pillowy soft texture, the parmesan adds a subtle sharpness and saltiness, the basil gives a hint of herbiness, the olive oil gives a luxurious oily flavour that coats the mouth, and the black pepper gives it a little kick.

Whilst it may seem basic, all the ingredients have been carefully selected. They all compliment each other so well. It is important that the ingredients are added in the right quantities so that they all balance each other.

Getting the quantities right will take some practice but it’s probably a good idea to start with less toppings than you think. Most people tend to add too many, preventing the dough from cooking properly and overpowering the taste of the dough.

Click here to find out more about avoiding an undercooked pizza.

The dough is the most important part of a traditional Neapolitan pizza, and the flavour and texture of the dough should be allowed to shine.

Where did the name for the Margherita pizza come from?

The origins for the name Margherita are disputed but there’s 2 basic theories:

The Margherita pizza is thought to be named after the Italian Queen Margherita of Savoy who, in 1889, complimented the most famous pizza-maker in Naples, Raffaele Esposito, on his pizza. The Queen’s favourite was a tomato, mozzarella, and basil pizza whose colours just so happened to match the colours of the Italian flag (red, white, and green).

Raffaele then called this pizza Margherita, after the Queen. If this is true, then we have Queen Margherita to thank for the popularity of pizza today. Also, many people think that Raffaele Esposito is the godfather of modern pizza.

Margherita in Italian translates as the daisy flower. This is perhaps not the most exciting theory, but maybe the pizza was named after the flower, due to its appearance. The white mozzarella cheese mimics the bright white petals of the daisy flower.

Whilst we may disagree on the name, I think we can all agree on the taste! The Margherita is the one pizza that everyone enjoys.

Many people think that a Marinara is a seafood pizza but this is not the case!

Unfortunately, many restaurants have served a seafood pizza and incorrectly called it a Marinara. In fact, no traditional Neapolitan pizza contains seafood as toppings.

The marinara pizza actually consists of fewer toppings that the Margherita but it is a beautiful pizza none the less. Again, quality authentic Italian pizza toppings are key here.

The toppings for an authentic Marinara are as follows:

Notice there is no cheese on this pizza. That’s right, no cheese! This is a vegan pizza, but do not underestimate a well made Marinara.

The tomato sauce is key in this recipe. Because there is no cheese added, the tomato sauce is really allowed to shine. As a result, the sauce should consist of the best tomatoes possible, and it needs to be seasoned to perfection.

Because the Italians love garlic (and so do I!), quite a lot of it is usually added. Around 2 – 3 cloves for a large pizza, crushed and teared or sliced. The garlic compliments the tomato sauce really well and provides plenty of flavour to this pizza. Don’t be afraid of overdoing the garlic!

A handful of fresh oregano is then added, before a generous sprinkling of olive oil.

The Marinara is arguably the healthiest Neapolitan pizza there is. Check out my article here to find out how many calories are in a Marinara pizza.

Where did the name for Marinara pizza originate?

Even though this pizza contains no seafood, marinara translates as “seafaring” in Italian.

The most popular theory is that it was commonly eaten by the sailor’s in Naples who were poorly paid and chose to the cheapest pizza available. With no cheese added, the marinara was a relatively cheap option.

It is also claimed that the sailors would cook marinara pizzas while at sea, due to the ingredients being cheap and having a long shelf life. On a long voyage they could easily keep all the ingredients in good condition.

The Pizza Cossaca, or Cossack pizza, is similar to a Margherita but with Parmesan or Pecorino added instead of mozzarella.

This is a little-known Neapolitan pizza that is thought to have originated in the 1840s when the Russian tsar Nicholas I visited Naples. He was very friendly with the Neapolitans and he donated two bronze statues which are still there, outside the palace of Naples.

Given this close relationship, the Neapolitans named a pizza after him, hence the name Pizza Cosacca. The Cosacca, or Cossack, was the name of the Russian and Ukranian state that the tsar ruled over at the time.

I thought I would include this pizza because hard cheese keeps well whereas mozzarella doesn’t. On the days that you don’t have mozzarella in, you can use Parmesan or Pecorino instead. Unless you’re going to have a marinara without any cheese, of course.

Personally, I like a combination of Parmesan and Pecorino, but experiment and use whichever you like or have in at the time.

This pizza is also one of the healthiest pizzas out there. Check out my article here to find out how many calories are in a pizza cosacca.

Like most Neapolitan pizzas, this one is very simple again. The authentic Italian toppings work so well together in this recipe. Using Parmesan instead of Mozzarella makes the Pizza Cossaca pack a punch and it has a much sharper taste than a Margherita.

Garlic is left off this pizza as the strong flavour of the garlic can clash with the bold flavour of the hard cheese. Feel free to experiment, of course, but the basic recipe is as follows:

The Pizza Cosacca is another simple wonderful, authentic Italian pizza.

This is one hot, devil of a pizza! In fact, Diavola translates as Devil in Italian. It is basically the authentic Italian version of a pepperoni pizza (except the Italians came up with it first).

The key topping in a Diavola Pizza is spicy Italian salami. There are many different types of salami and any can be used. If a milder salami is used, sometimes chillies are added to provide a bit of extra heat. This is supposed to be a fiery pizza after all!

The ingredients are as follows:

One thing to note is that salami is generally quite oily so be careful to use a little less olive oil than you would normally.

While strictly speaking not a traditional pizza, Nduja is most certainly an authentic, traditional Italian product. For those of you not familiar with Nduja (pronounced en-doo-ya), it is a spicy, spreadable Italian salami.

What makes Nduja great for pizza, despite the incredible flavour, is the fact that it melts when cooked. I enjoy spooning it onto a pizza and watching it melt into the tomato sauce.

Mozzarella cheese or Parmesan/Pecorino can be used for this pizza. I prefer using hard cheese for this pizza as the spiciness of the Nduja somewhat overpowers the delicate taste of Mozzarella. But experiment and use whichever you prefer.

Nduja can be difficult to get hold of in supermarkets, but fortunately it’s readily available on Amazon! This is the Nduja that I use on Amazon.

It comes in a jar which means it’s easy to store in the fridge and will last a few months. It’s also really easy to spoon onto pizza. And the taste is incredible! Trust me, if you haven’t tried Nduja, you need to!

You can click the image above to see my favourite Nduja on Amazon.

You will sometimes see this pizza called Diavola as well, where they will use Nduja instead of or as well as salami. The Nduja pizza looks like this:

Note that Nduja is typically very oily, even more so than regular salami. Be sure to use a lot less oil on the pizza then normal. I tend to just use a very small drizzle or none at all. You can always add some more after it has cooked.

The classic combination of ham and mushroom. It’s a great flavour combination that works brilliantly on pizzas.

Italian cured ham, Proscuitto, is the best choice here as it won’t overcook on the pizza. Any cured ham will work well but use Proscuitto if you’re looking for the authentic Italian topping.

The best cheese for this pizza is generally considered to be Mozzarella as the stronger taste of hard cheese can overpower the ham and mushroom.

The toppings for the Prosciutto e Funghi:

Be sure to slice your mushrooms thinly, otherwise they will be undercooked.

As well as the traditional pizzas, feel free to experiment with the following authentic Italian pizza toppings:

I’m sure there are many more great toppings that I’ve missed out but I’ve tried to keep the list quite traditional.

For some more inspiration, take a look at pizza toppings and varieties by country on Wikipedia by clicking here.

I personally think that starting out with the classic Neapolitan pizzas Margherita and Marinara is the best way to go. Once you’ve got the classic pizzas down, then you can start experimenting with various toppings.

Remember, when it comes to traditional Italian Neapolitan pizza, less is more in terms of the toppings. Focus on a few high quality toppings that compliment each other, whilst allowing the quality of the dough to shine.

Experiment, have fun, and get making delicious pizza at home!

I often get asked what type of oven I use for my pizzas. Well, I use a portable pizza oven made by Ooni. 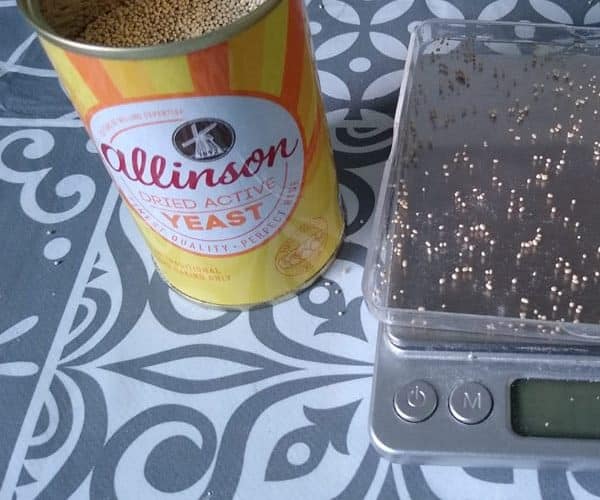 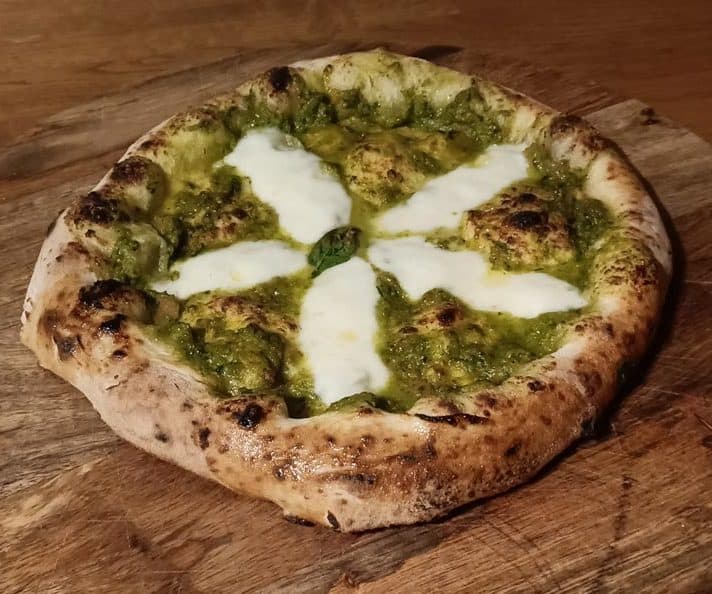 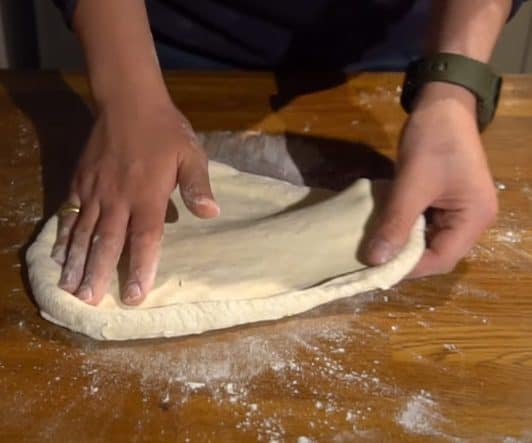 Stretching pizza dough The shaping of a pizza is basically done by stretching the dough into a thin, round shape... 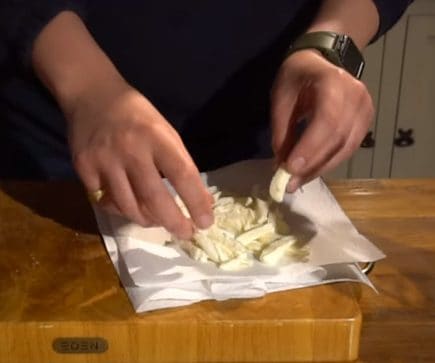